This item is a 10" X 12",color lithograph photo of Jennifer Garner.Jennifer Garner was the lean, athletic star of the action-adventure television series Alias (2001-06), in which Garner played American superspy Sydney Bristow. Jennifer Garner began her acting career in New York in the mid-1990s, then moved to Los Angeles and won small roles in various TV productions. Her regular appearances on the college-angst series Felicity (1998) led to movie roles, including the comedy Dude, Where's My Car? (2000, with Ashton Kutcher) and the big-budget action flick Pearl Harbor (2001, starring Kate Beckinsale). More importantly, Felicity creator J. J. Abrams tapped Garner for the lead role in Alias (2001, co-starring Bradley Cooper), the hit show that made her a star. She made her way into feature films, including a small role in Catch Me If You Can (2002, starring Leonardo DiCaprio), and as comic-book heroine Elektra in the films Daredevil (2003, starring Ben Affleck) and Elektra (2005). Since then, Jennifer Garner has been a reliable Hollywood lead, mostly in romantic comedies, with films including 13 Going on 30 (2004, with Mark Ruffalo), Juno (2007, starring Ellen Page), Ghosts of Girlfriends Past (2009, starring Matthew McConaughey), Valentine's Day (2010, with Patrick Dempsey) and the 2011 remake of Arthur (with Russell Brand in the title role).The lithograph photo has been autographed on the front by Jennifer Garner.........BOTH PHOTO AND AUTOGRAPH ARE IN VERY GOOD CONDITION. 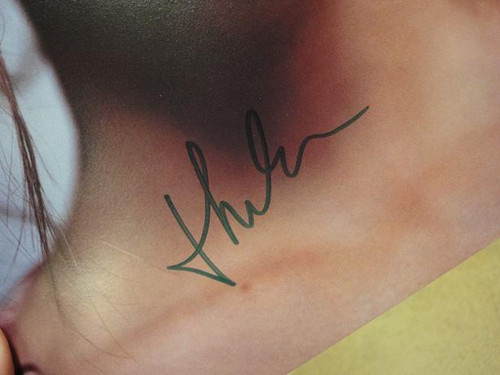