This item is a 5" X 8" -8 page Congressional Record featuring a speech made in the United States House Of Representatives by James Garfield on March 17, 1880. The authentic item is part of The Congressional Record and the speech is entitled-"Obedience To The Law The Foremost Duty Of Congress" The original pamphlet is numbered 811521A and was published by The United States Government in 1880.....Born in a log cabin to poor, uneducated parents, James Garfield went on to be a scholar, Civil War hero, U.S. congressman and, eventually, president of the United States. First elected to congress in 1862, he spent nearly 18 years there until winning a Senate seat in 1880. He got involved in the 1880 presidential race as a supporter of Secretary of the Treasury John Sherman, a fellow Ohio Republican. But Garfield himself ended up as a dark horse candidate and narrowly defeated Democrat Winfield Scott Hancock for the presidency. Unfortunately, Garfield's rags-to-riches story came to an abrupt end when a disgruntled Republican supporter, Charles Guiteau, shot Garfield twice on 2 July 1881, just four months after the president had been sworn in. Garfield lingered on through the summer and died in Elberon, New Jersey on 19 September 1881. His vice president, Chester A. Arthur, was sworn in as president on 20 September 1881. The pamphlet has been autographed on the front by James Garfield with a fountain pen in blue.................BOTH SPEECH PAMPHLET AND AUTOGRAPH ARE IN VERY GOOD CONDITION. 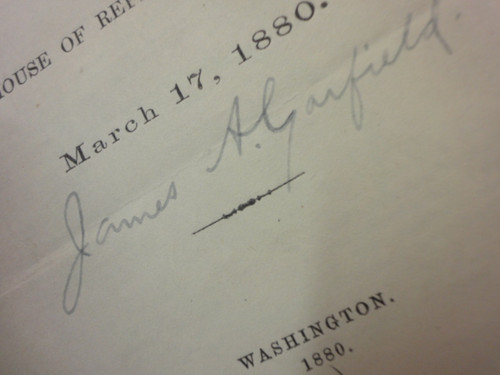