This item is an 8" X 10",black and white photo of Art Garfunkel and Jack Nicholson in a scene from the 1971 Movie-"Carnal Knowledge"."Maybe you're not supposed to like it with someone you love." With a script by satirist and cartoonist Jules Feiffer, Mike Nichols's Carnal Knowledge (1971) ruthlessly exposed the damage wrought by pre-1960s sexual mores. From their post-World War II college years at Amherst through the Vietnam era, buddies Jonathan (Jack Nicholson) and Sandy (Art Garfunkel) are a catalogue of male sexual dysfunction. Sensitive Sandy falls in love with and marries college sweetheart Susan (Candice Bergen) only to wonder years later if he missed out on finding the perfect sex/love partner. Jonathan lives for aggressive sexual conquest (starting with Sandy's Susan in college), even as he rails against female "ballbusters," finally guilt-marrying his tiredly voluptuous mistress Bobbie (Ann-Margret, in an Oscar-nominated performance) after she tries to kill herself. By the late '60s, Sandy has moved on to a hippie chick girlfriend (Carol Kane) who can raise his consciousness about the sexual revolution, and Jonathan is single again, but Sandy is a little too old for the peace-and-love generation, and Jonathan bitterly faces emasculating impotence.The photo has been autographed on the front cover by Art Garfunkel and Jack Nicholson.....................BOTH PHOTO AND AUTOGRAPH ARE IN VERY GOOD CONDITION................. 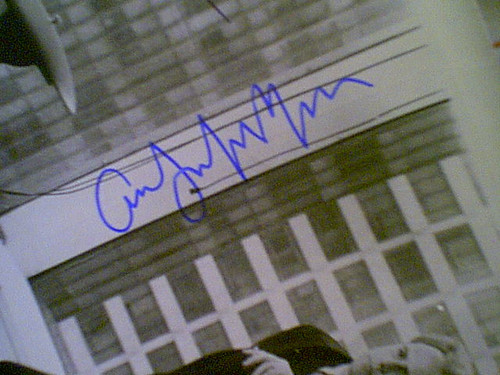