Stan Freberg-"Nuttin For Christmas"-1955-Hill & Range-sheet music. This famous Christmas song was recorded by Stan Freberg on Capitol Records and he is featured on the front cover of the sheet music in a 50's Christmas Scene.Best known for his satirical recorded send-ups of everything from popular songs to American history and as the father of funny television commercials, Stan Freberg is truly one of comedy's great geniuses. Born in Pasadena, CA, Freberg felt the performing bug's bite early on. He launched his professional career in 1943 performing vocal impressions on Cliffie Stone's radio program. In the mid-'40s, Freberg made a name for himself as a voice artist for such major animation studios as Warner Bros., Disney, Paramount, and Walter Lantz; he and fellow voice artist Daws Butler were both regulars on the Time for Beany show. During the '50s, Freberg began making his famous song parodies of such hits as "The Yellow Rose of Texas," "The Great Pretender," and "Banana Boat (Day-O)." These and others not only made fun of the tunes, they also skewered pop culture and history, as in his famous "Dragon-Net" send-up of Jack Webb's long-running television show. As an actor, Freberg has only appeared in a couple of feature films making his debut in Callaway Went Thataway (1951). He has also done work on Broadway and continues to occasionally make appearances on television shows such as Roseanne. In 1997, he became a regular on the CBS children's program The Weird Al Show. As a member of the advertising world, Freberg made many inroads toward making commercials genuinely entertaining. His television campaign for Sunsweet Prunes -- "Today the pits; tomorrow the wrinkles" -- is still considered one of the best of the 1970s. In 1988, Freberg published his autobiography, It Only Hurts When I Laugh. The sheet music has been autographed on the front cover by Stan Freberg with a fountain pen in blue...BOTH SHEET MUSIC AND AUTOGRAPHS ARE IN VERY GOOD CONDITION.LEFT SIDE OF SHEET MUSIC HAS THREE BINDER HOLES WHICH DO NOT AFFECT PHOTO OR AUTOGRAPH................. 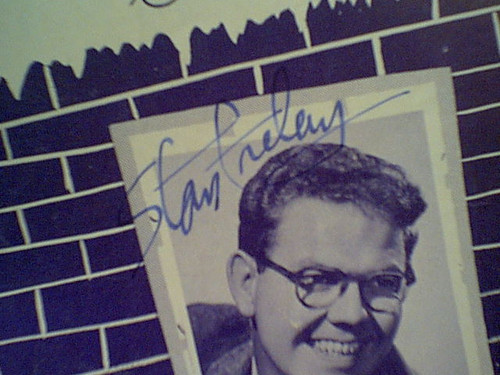