This item is an 8" X 10",color photo of "Friends" stars Matt LeBlanc, Matthew Perry and David Schwimmer.Friends (stylized as FRIENDS) is an American sitcom created by David Crane and Marta Kauffman, which aired on NBC from September 22, 1994 to May 6, 2004. The series revolves around a group of friends in Manhattan. The series was produced by Bright/Kauffman/Crane Productions, in association with Warner Bros. Television. The original executive producers were Crane, Kauffman and Kevin S. Bright, with numerous others being promoted in later seasons.Kauffman and Crane began developing Friends under the title Insomnia Cafe in November/December 1993. They presented the idea to Bright, with whom they had previously worked, and together they pitched a seven-page treatment of the series to NBC. After several script rewrites and changes, including a second title change to Friends Like Us, the series was finally named Friends and premiered on NBC's coveted Thursday 8:30 pm timeslot. Filming for the series took place at Warner Bros. Studios in Burbank, California in front of a live studio audience. The series finale (the 236th episode), airing on May 6, 2004, was watched by 51.1 million American viewers, making it the fourth most watched series finale in television history and the most watched episode of the decade.The color photo has been autographed on the front by Matt LeBlanc Matthew Perry David Schwimmer............BOTH PHOTO AND AUTOGRAPHS ARE IN VERY GOOD CONDITION. 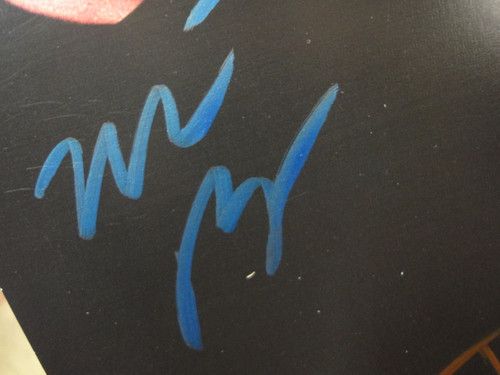