"Says My Heart"-1938-Famous Music Corp-sheet music. This song is featured in the 1938 Paramount Movie-"Cocoanut Grove". The movie stars Fred MacMurray and Harriet Hilliard (Nelson)-of "Ozzie & Harriet" fame and they are featured on the front cover in original scenes.The legendary Cocoanut Grove nightclub is the setting for this all-star Paramount musical. Fred MacMurray heads the cast as Johnny Prentice, a small-time bandleader who heads to the Grove for an all-important audition. He is accompanied by his foster son Half-Pint (Billy Lee), a talented drummer in his own right. Joining the troupe is Linda Rodgers (Harriet Hilliard), ostensibly Half-Pint's tutor but actually an aspiring vocalist. The thinnish plot serves as an excuse for an unending stream of specialty numbers featuring Royal Hawaiian orchestra leader Harry Owens, comedian Ben Blue, the zany Yacht Club Boys (a WASP version of the Ritz Brothers), funny-noise specialist Rufe Davis and bandmaster Red Stanley. In the course of events, nine new original songs are performed, none of which graduated to hit-parade status. Curiously, the real Cocoanut Grove is never seen, though the Paramount mockup is reasonably convincing.The sheet music has been autographed on the front cover by Fred MacMurray with a fountain pen in blue and Harriet Hilliard with a fountain pen in red..................BOTH SHEET MUSIC AND AUTOGRAPHS ARE IN VERY GOOD CONDITION............. 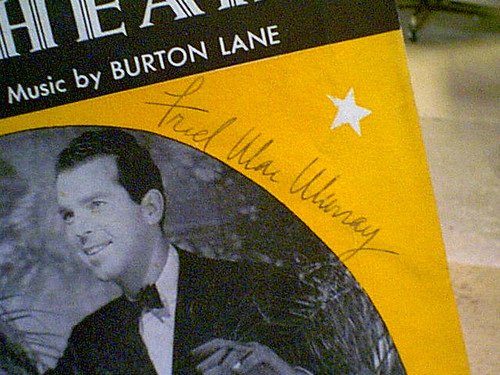