"Theme From Mr. Novak"(MGM 4222)_"And Other High School Theme"-LP. This LP-which was released in 1963 features the television series-"Mr. Novak" starring James Franciscus and Dean Jagger.Mr. Novak is a one-hour dramatic series starring James Franciscus (1934-1991) in the title role, which aired on NBC for two seasons, 1963-1965.The series followed John Novak, an idealistic first-year English teacher at Jefferson High School in Los Angeles who often got involved in the lives of his students and fellow teachers. Ironically, Franciscus himself held a bachelor of arts degree in English from Yale University. Principal Albert Vane was played by Dean Jagger, who was nominated for an Emmy Award in 1964 and 1965 for his performance. When Jagger left the series in 1964, Burgess Meredith played new principal Martin Woodridge. The show, produced by MGM Television, was broadcast on Tuesday evenings from 7:30 to 8:30 p.m. (Eastern time). In its first season, Mr. Novak's principal competition was the ABC war series Combat! starring Rick Jason and Vic Morrow, and the second half of the hour-long The Red Skelton Show on CBS. In the second season, the competition was still Combat!, the World War Two series on CBS. Skelton was moved a half-hour later in 1964.The LP has been autographed on the front cover by James Franciscus and Dean Jagger.......CONDITION OF VINYL,COVER AND AUTOGRAPHS IS VG.RECORD IS IN ORIGINAL MGM INNER SLEEVE.COVER HAS A BB HOLE........................ 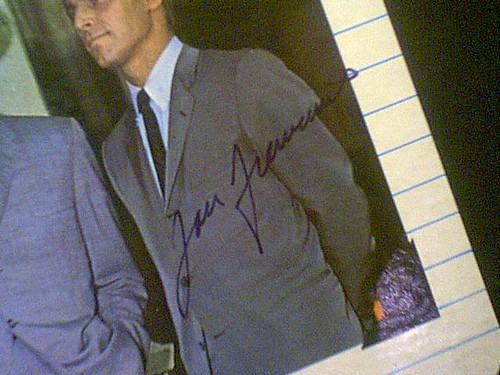