This item is a 4" X 6", color photo of General Tommy Franks. Tommy Ray Franks (born 17 June 1945) is a retired general in the United States Army. His last army post was as the Commander of the United States Central Command, overseeing United States military operations in a 25-country region, including the Middle East. Franks succeeded General Anthony Zinni to this position on 6 July 2000 and served until his retirement on 7 July 2003. Franks was the United States general leading the attack on the Taliban in Afghanistan in response to the September 11 attacks on the World Trade Center and The Pentagon in 2001. He also oversaw the 2003 invasion of Iraq and the overthrow of Saddam Hussein. The color photo has been autographed on the front by Tommy Franks....................BOTH PHOTO AND AUTOGRAPH ARE IN VERY GOOD CONDITION 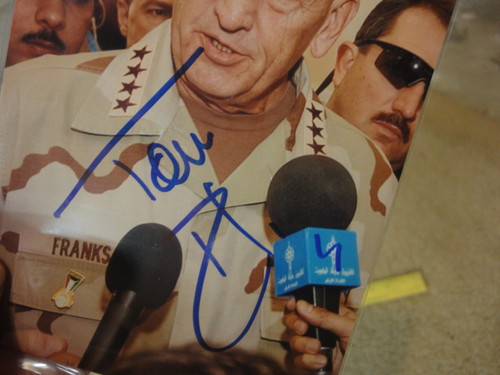