Sport Magazine-November 1963-96 pages. This vintage Sports Magazine-which originally sold for thirty five cents-features a color cover photo of Whitey Ford. Edward Charles "Whitey" Ford (born October 21, 1928]) is a former Major League Baseball pitcher who spent his entire 18-year career with the New York Yankees. He was voted into the Baseball Hall of Fame in 1974.In 1955, Ford led the American League in complete games and games won; in 1956 in earned run average and winning percentage; in 1958, in earned run average; and in both 1961 and 1963, in games won and winning percentage. Ford won the Cy Young Award in 1961; he likely would have won the 1963 AL Cy Young, but this was before the institution of a separate award for each league, and Ford could not match Sandy Koufax's numbers for the Los Angeles Dodgers of the National League. He would also have been a candidate in 1955, but this was before the award was created.Some of Ford's totals were depressed by Yankees manager Casey Stengel who viewed Ford as his top pitching asset, and often reserved his ace left-hander for more formidable opponents such as the Tigers, Indians and White Sox. When he became manager in 1961, Ralph Houk promised Ford he would pitch every fourth day, regardless of opponent; after exceeding 30 starts only once in his nine seasons under Stengel, Ford had 39 in 1961. A career-best 25-4 record and the Cy Young Award ensued, but Ford's season was overshadowed by the home run battle between Roger Maris and Mickey Mantle. As a left-hander, Ford was also deft at keeping runners at their base: He set a record in 1961 by pitching 243 consecutive innings without allowing a stolen base.At one point during the 1963 season, Ford pitched a shutout and announced he had given up smoking. He said, "My doctor told me that whenever I think of smoking, I should think of a bus starting up and blowing the exhaust in my face." The magazine has been autographed on the front by Whitey Ford...............BOTH MAGAZINE AND AUTOGRAPH ARE IN VERY GOOD CONDITION.............. 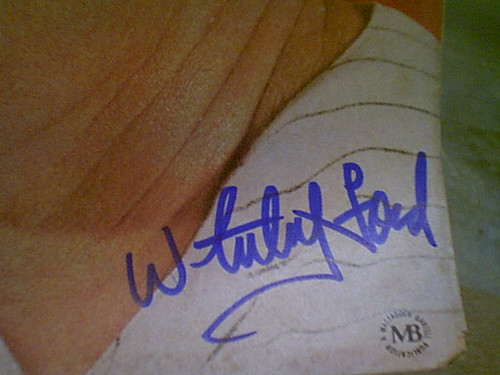