The Four Voices were a 1950s vocal harmony quartet based in Tennessee that issued a succession of singles on Columbia Records. The Four Voices were Allan Chase (tenor), Sal Mayo (tenor), Bill McBride (baritone) and Frank Fosta (bass baritone). The group appeared on the Arthur Godfrey television programme, and in ice-shows and revues. The Four Voices, despite their lack of big hits, set a high standard for their peers. Mitch Miller signed The Four Voices to Columbia after seeing them on Arthur Godfrey's Talent Scouts. The group often recorded with Ray Coniff, and sometimes under the direction of Fred Weismantel, who composed the hit "Lovely One" and a number of their other songs. The sheet music has been autographed on the front cover by Allan Chase Sal Mayo Bill McBride Frank Fosta...BOTH SHEET MUSIC AND AUTOGRAPHS ARE IN EXCELLENT CONDITION. 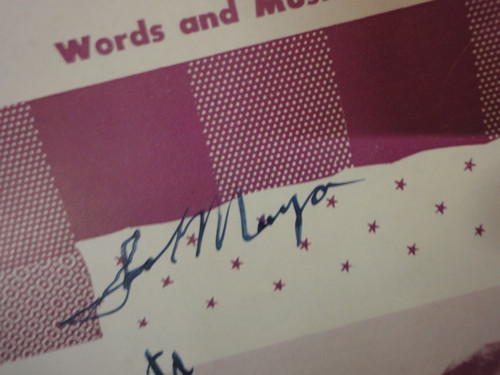