This item is a vintage 8" X 10", black and white photo of Edsel Ford on the stand in Washington D.C. in 1938. This photo was published in a newspaper in Los Angeles California. The back of the photo has an original stamp from The International News Photos from Los Angeles. The photo is from the newpaper's archives and was not available for retail sale. The back of the photo also has original editor's markings.

Edsel Bryant Ford (November 6, 1893 – May 26, 1943) was an American business executive and philanthropist who was the son of pioneering industrialist Henry Ford and his wife, Clara Jane Bryant Ford. He was the president of Ford Motor Company from 1919 until his death in 1943.

He worked closely with his father, as sole heir to the business, but was keen to develop cars more exciting than the Model T ("Tin Lizzie"), in line with his personal tastes. Even as president, he had trouble persuading his father to allow any departure from this formula. Only a change in market conditions enabled him to develop the more fashionable Model A in 1927. Edsel also founded the Mercury division and was responsible for the Lincoln-Zephyr and Lincoln Continental. He introduced important features, such as hydraulic brakes, and greatly strengthened the company's overseas production.Ford was a major art benefactor in Detroit and also financed Admiral Richard Byrd's polar explorations. He died of stomach cancer aged 49. Henry Ford temporarily reassumed the presidency of Ford on Edsel’s death, then Edsel’s eldest son, Henry Ford II, succeeded Henry as president of Ford in 1945. The photo has been autographed on the front by Edsel Ford.....................BOTH PHOTO AND AUTOGRAPH ARE IN VERY GOOD CONDITION. 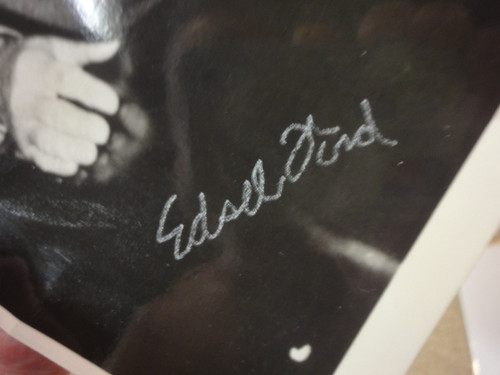