Rolling Stone Magazine-May 13,1971. This vintage Rolling Stone Magazine/Newspaper-which originally sold for fifty cents-features a cover photo of actor Peter Fonda. The Rolling Stone also features a 5 page article with photos of Peter Fonda-"Roughing It With Peter Fonda".Fonda, Peter, 1939, American actor. The son of Henry Fonda and brother of Jane Fonda, he made his screen debut in a forgettable 1963 feature. Several movies later he co-wrote and starred in the now-classic 1960s motorcycle odyssey Easy Rider (1969), an enormously successful film that largely typecast him as a laid-back biker. Fonda subsequently made a string of other films, including The Hired Hand (1971), a Western that also marked his directorial debut. He did not approach his earlier success for almost three decades, however, until he won critical and popular acclaim for his starring role in Ulee's Gold (1997). He is the father of actress Bridget Fonda. The Rolling Stone Magazine has been autographed on the front by Peter Fonda...........BOTH ROLLING STONE AND MAGAZINE AND AUTOGRAPH ARE IN VERY GOOD CONDITION................... 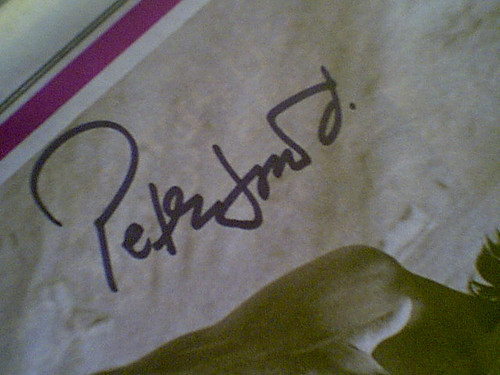