Original Soundtrack-"The Young Lovers"(Columbia 7010 mono)-LP. This soundtrack LP features the 1964 MGM Movie-"The Young Lovers". The movie stars Peter Fonda,Nick Adams and Deborah Walley.Producer Samuel Goldwyn Jr. took a stab at directing with this '60s-era melodrama about college students dealing with the realities of love, sex, and war. Peter Fonda and Sharon Hugueny star as Eddie and Pam, the titular young lovers. An art student and teacher's assistant, the two meet in college and proceed to fall into a passionate affair. Emotional tumult later follows though, when Pam announces she is pregnant with Eddie's child. Also starring Nick Adams' and Deborah Walley, The Young Lovers was the final big-screen appearance by Hugueny whose career spiraled into disarray after her short marriage to producer Robert Evans.The LP has been autographed on the front cover by Peter Fonda,Nick Adams and Deborah Walley..............CONDITION OF VINYL IS WEAK VG.CONDITION OF COVER AND AUTOGRAPHS IS VG........... 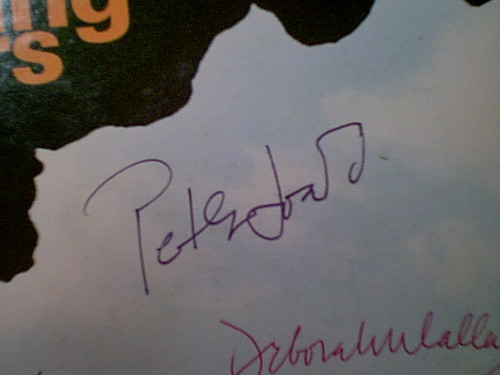