Rolling Stone Magazine/Newspaper-March 9,1978-No.260. This vintage Rolling Stone-which originally sold for $1.00-features a color cover photo of actress Jane Fonda plus an article with photos.The daughter of screen legend Henry Fonda (and the sister of actor Peter Fonda), Jane Fonda started in the movies with the forgotten 1960 comedy Tall Story. A decade later she was a movie star in her own right, having gone from the sex kitten in 1968's Barbarella to earning a reputation as a serious actress, winning Oscars for her roles in Klute (1971, directed by Alan Pakula) and Coming Home (1978). In the 1970s she was also famous as an outspoken opponent of U.S. involvement in Vietnam. She made a highly publicized trip to Hanoi, denouncing U.S. policy and earning the uncomplimentary nickname "Hanoi Jane" -- a stunt she never lived down. In the 1980s she suddenly had a new career as the star and producer of the "Jane Fonda's Workout" exercise videos and books. She married media mogul Ted Turner in 1991 and semi-retired from the movies. They separated in 2000 and Fonda filed for divorce in April of 2001. Her other films include The China Syndrome (1979, with Jack Lemmon), 9 to 5 (1980, with Dolly Parton), Stanley and Iris (1990, with Robert DeNiro) and Monster-in-Law (2005, with Jennifer Lopez).The Rolling Stone has been autographed on the front cover by Jane Fonda..........BOTH ROLLING STONE AND AUTOGRAPH ARE IN VERY GOOD CONDITION. 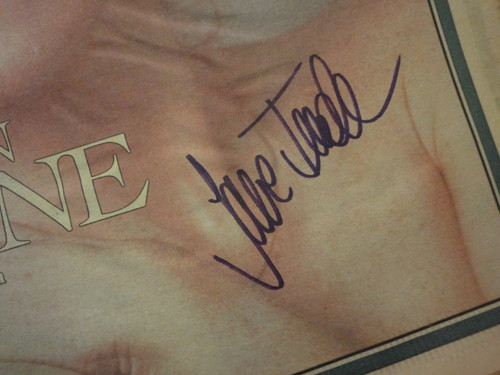