This item is an 8" X 10",color photo of actor Jamie Foxx in an original scene from the 2004 Movie-"Ray".Ray is a 2004 biographical film focusing on 30 years of the life of rhythm and blues musician Ray Charles. The independently produced film was directed by Taylor Hackford and starred Jamie Foxx in the title role; Foxx received an Academy Award for Best Actor for his performance.Charles was set to attend an opening of the completed film, but he died before its premiere.Born on a sharecropping plantation in Northern Florida, Ray Charles Robinson went blind at the age of seven. Inspired by a fiercely independent mother who insisted he make his own way in the world, Charles found his calling and his gift behind a piano keyboard. Touring across the Southern musical circuit, the soulful singer gained a reputation and then exploded with worldwide fame when he pioneered incorporating gospel, country, jazz and orchestral influences into his inimitable style.As he revolutionized the way people appreciated music, he simultaneously fought segregation in the very clubs that launched him and championed artists rights within the corporate music business. The movie provides a portrait of Charles musical genius as he overcomes drug addiction while transforming into one of his countrys most beloved performers.The photo has been autographed on the front by Jamie Foxx................BOTH PHOTO AND AUTOGRAPH ARE IN VERY GOOD CONDITION....................... 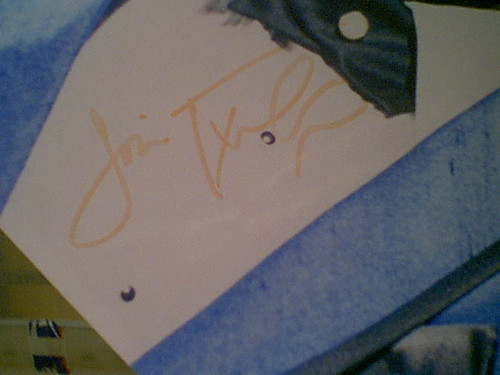