This item is an 8" X 10", black and white photo of actor Glenn Ford in a scene from the 1986 Disney Television Movie-"My Town". The photo has an original dated byline from ABC Television explaining what the movie is about and date of broadcast.My Town is a one-hour Disney TV movie set in a tranquil American community. Meredith Salenger considers the place "My Town," and prefers that it remain untouched. Thus Salenger is dead set against the urban renewal plans of town banker Glenn Fordwho is also her grandfather. My Town first saw the light of day on May 25, 1986. It was shown back to back with another 60-minute film, The Casebusters, on ABC's Disney Sunday Movie. The photo has been autographed on the front by Glenn Ford...........CONDITION OF PHOTO,BYLINE AND AUTOGRAPH IS EXCELLENT..................... 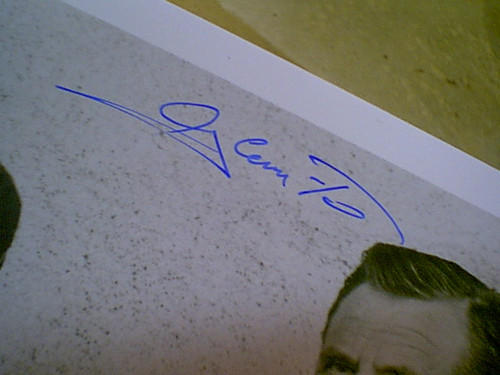