THIS IS AN AUTHENTICALLY AUTOGRAPHED LP BY FRANK FONTAINE... SONGS I SING ON THE JACKIE GLEASON SHOW-FRANK FONTAINE(ABC[PARAMOUNT ABC 442)LP HAS ORIGINAL INNER SLEEVE. PHOTO COVER IS SIGNED BY FRANK FONTAINE. CONDITION OF THE VINYL,COVER, AND AUTOGRAPH IS VERY GOOD. Frank Fontaine (19 April 1920  4 August 1978) was an American comedian and singer. Born in Cambridge, Massachusetts, he is best known for his appearances on television shows of the 1950s and 1960s, including The Jackie Gleason Show, The Jack Benny Show, and The Tonight Show. One of his earliest appearances was on the radio show, The Jack Benny Program. During an episode which aired on April 16, 1950, Fontaine played a bum (named "John L. C. Silvoney") who asked Benny for a dime for a cup of coffee. The smallest coin Benny had to offer was a fifty-cent piece, so he gave it to him. The story Benny told about this event became a running gag during later shows. Fontaine's goofy laugh and other voice mannerisms made a hit with the audience, and Benny brought him back for several more radio shows between 1950 and 1952. He also later appeared in several of Benny's televisions shows. Stan Freberg's voice characterization for Pete Puma in a 1952 cartoon was based on Fontaine's character voice. On the Jackie Gleason show, he played the character of Crazy Guggenheim during Gleason's "Joe The Bartender" skits. His trademark was a bug-eyed grin, the same silly laugh he did on Jack Benny's radio show, and a surprisingly good voice when he sang songs. His singing was so good that when he later released an album called Songs I Sing On The Jackie Gleason Show, it went to number one on the Billboard magazine Album Charts in 1962. Fontaine received a mention in satirist Tom Lehrer's 1965 song "National Brotherhood Week", from the album That Was the Year That Was. In the live show, he mentioned a (fake) celebration called National Make-Fun-of-the-Handicapped Week, "Which Jerry Lewis and Frank Fontaine are in charge of, as you know." Fontaine also portrayed Bucky fom Kimba, The White Lion, though he was uncredited in the end credits. Fontaine was to have played the voice of Rocky the Rhino in Walt Disney's The Jungle Book, but Disney cut the beast from the picture. He died in Spokane, Washington from a heart attack, at the age of 58. Fontaine is fondly remembered in Super Furry Animals' 1996 debut single: "Hometown Unicorn". In the lyrics, singer Gruff Rhys sings the chorus: I say you please return me Will you ever return me? Will you ever return me? Just like Frankie Fontaine. 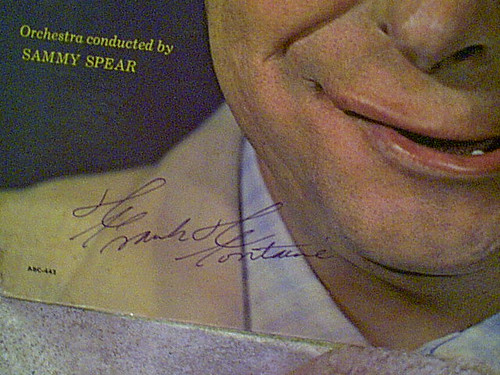