"I'm Ridin For A Fall"-1943-Harms-sheet music. This vintage WWII era sheet music originally sold for fifty cents and features a "Buy United States War Bonds" Advertisement. The movie stars Errol Flynn.Errol Flynn was one of Hollywood's biggest stars in the 1930s and '40s, an actor famous for his boundless devil-may-care energy in the rousing adventures known as swashbucklers. He spent his youth in Australia and England, and his young adult years mining and running plantations in New Guinea, before appearing in his first movie in 1933, the Australian feature The Wake of the Bounty. From there he went to England briefly before making his way to Hollywood and the movies. In robust features like Captain Blood (1935) and The Adventures of Robin Hood (1938), Flynn was the dashing hero whose winning smile and flashy swordplay made the ladies whimper with longing. Offscreen, Flynn had a reputation as a freewheeling boozer, womanizer and all-around bad boy. Tongues wagged in 1942 when he was tried for statutory rape (and acquitted), but the scandal didn't diminish his celebrity or his popularity. He starred mostly in westerns, sea adventures and war movies, including The Charge of the Light Brigade (1935), They Died With Their Boots On (1941) and The Adventures of Don Juan (1948). He lost favor in Hollywood in the early 1950s, but we in the midst of a comeback at age 50 when he died suddenly in 1959.The sheet music has been autographed on the front cover by Errol Flynn with a fountain pen in blue.......BOTH SHEET MUSIC AND AUTOGRAPH ARE IN VERY GOOD CONDITION...................... 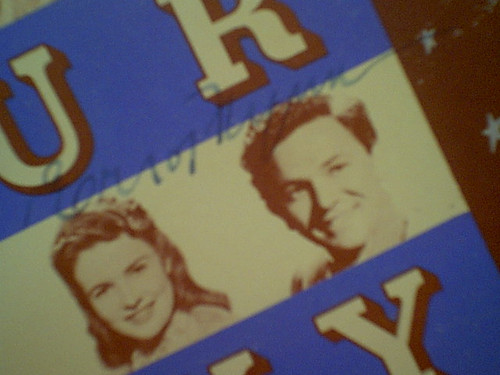