"Some Sunday Morning"-1945-Harms-sheet music.San Antonio is a 1945 Western Technicolor film starring Errol Flynn and Alexis Smith. The movie was written by W. R. Burnett and Alan Le May, and directed by David Butler as well as uncredited Robert Florey and Raoul Walsh.The film was nominated for two Academy Awards; for Best Original Song ("Some Sunday Morning") and Best Art Direction (Ted Smith, Jack McConaghy).The sheet music has been autographed on the front cover by Errol Flynn with a fountain pen in blue and Alexis Smith with a fountain pen in blue..........BOTH SHEET MUSIC AND AUTOGRAPHS ARE IN VERY GOOD CONDITION. 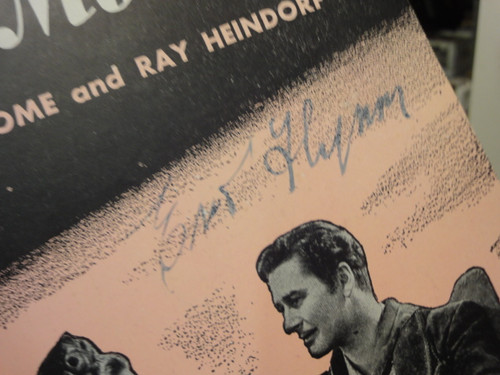