"Message From The President Of The United States To The Two Houses Of Congress At The Commencement Of The First Session Of The Thirty Second Congress"-December 2, 1851-32nd Congress-1st Session-Ex. Doc No.2-Boyd Hamilton-Washington-5" X 8 1/2"-468 pages-Hardcover Book-Autographed By Millard Fillmore.Millard Fillmore (January 7, 1800  March 8, 1874) was the 13th President of the United States (18501853) and the last member of the Whig Party to hold the office of president. As Zachary Taylor's Vice President, he assumed the presidency after Taylor's death. Fillmore opposed the proposal to keep slavery out of the territories annexed during the MexicanAmerican War in order to appease the South and so supported the Compromise of 1850, which he signed, including the Fugitive Slave Act ("Bloodhound Law") which was part of the compromise. On the foreign policy front, he furthered the rising trade with Japan and clashed with the French over Napoleon III's attempt to annex Hawaii and with the French and the British over the attempt of Narciso López to invade Cuba. After his presidency, he joined the Know-Nothing movement; throughout the Civil War, he opposed President Abraham Lincoln and during Reconstruction supported President Andrew Johnson. He is consistently included in the bottom 10 of historical rankings of Presidents of the United States.The book has been autographed on the first page by Millard Fillmore with a fountain pen with faded blue/black ink..............CONDITION OF BOOK AND AUTOGRAPH USED. 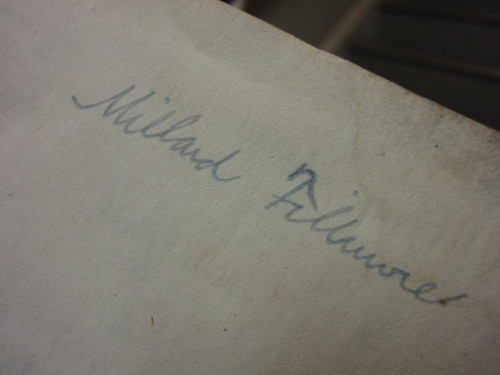