This item is an 8" X 10",color photo of actor Laurence Fishburne.Laurence Fishburne played the tough, mysterious, leather-clad Morpheus in the box office hit The Matrix (1999, with Keanu Reeves) and its sequels. Fishburne was acting on a national level from a young age: at age 12 he began making regular appearances on TV soap opera One Life To Live, and at 14 he spent over a year in the Philippines filming Francis Ford Coppola's violent Vietnam parable Apocalypse Now. In the 1980s Fishburne returned to TV as the whimsical Cowboy Curtis on Pee Wee's Playhouse. His breakthrough movie was the 1991 urban drama Boyz N the Hood (with Ice Cube), and in 1993 he was nominated for an Oscar for his portrayal of singer Ike Turner in What's Love Got To Do With It? His other film roles include playing a Manhattan chess whiz in Searching for Bobby Fischer (1993, with Ben Kingsley), the title role in Othello (1995), and a weary Boston cop in Mystic River (2003, with Sean Penn). Fishburne won Emmy awards in 1993 (for the series Tribeca, as an actor) and 1997 (for the TV movie Miss Evers' Boys, as a producer) and a Tony Award in 1992 for the play Two Trains Running. He joined the cast of TV's C.S.I. in 2008.The color photo has been autographed on the front by Laurence Fishburne.....................BOTH PHOTO AND AUTOGRAPH ARE IN VERY GOOD CONDITION................. 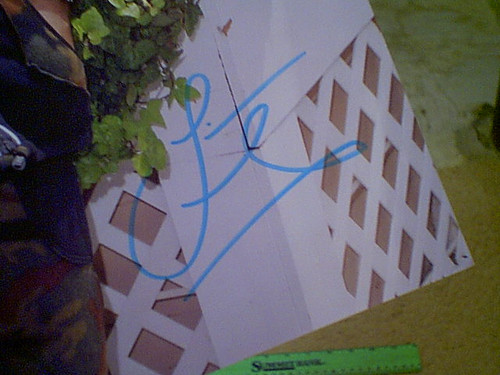