Life Magaine-August 7,1944-100 pages. This vintage Life Magazine-which originally sold for ten cents-features a full cover photo of actress Geraldine Fitzgerald. The magazine also features a 4 page article with photos about Gerladine Fitzgerald's starring role in the 1944 movie-"Wilson".The daughter of a Dublin attorney, Geraldine Fitzgerald was still in her teens when she made her theatrical bow with the Gate Theatre. In films from 1934, she played a series of petulant ingénues in a string of forgettable quota quickies; in later years, she sarcastically summed up her early screen roles by repeating her most frequent snatch of dialogue, "But daddy, it's my birthday!" With her first husband, she moved to New York in 1938, where she was hired by her old Gate Theatre colleague Orson Welles to star in the Mercury Theater production Heartbreak House. This led to several choice Hollywood assignments in such films as Dark Victory (1939) and Wuthering Heights (1939). Forever battling with studio executives over her often inconsequential screen assignments (exceptions included such roles as Edith Galt in the 1945 biopic Wilson), Fitzgerald briefly gave up films in 1948 to return to the stage. Carefully picking and choosing her subsequent movie roles, she established herself as a reliable character actress in quality films like Ten North Frederick (1958) and The Pawnbroker (1965). She briefly pursued a folksinging career before returning to Broadway in the ultra-demanding role of Mary Tyrone in the 1971 revival of Long Day's Journey Into Night. Active into the late '80s, Fitzgerald has added a welcome dash of Hibernian feistiness to such projects as Arthur (1981) and Easy Money (1983). Geraldine Fitzgerald is the mother of prominent British film director Michael Lindsay-Hogg. The magazine has been autographed on the front cover by Gerladine Fitzgerald with a fountain pen in black.....BOTH MAGAZINE AND AUTOGRAPH ARE IN VERY GOOD CONDITION....... 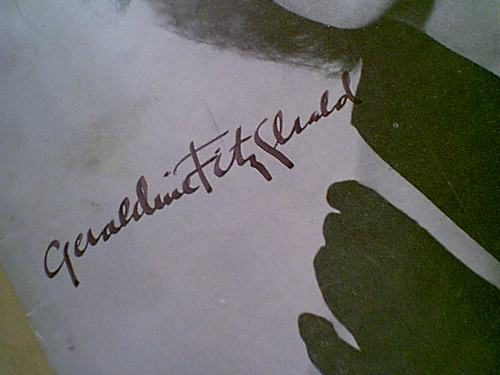