This item is an 8" X 11",black and white lithograph photo of actress Geraldine Fitzgerald. The lithograph photo has been mounted on an 8" X 11" piece of photography paper.Geraldine Fitzgerald appeared in Shining Victory (1941) and Watch on the Rhine (1943) for Warner Bros., and Wilson (1944) for Fox, but her career was hampered by her frequent clashes with the management of the studio, and the suspensions that resulted. She lost the role of 'Brigid O'Shaughnessy', the villainess of The Maltese Falcon due to her clashes with Jack Warner. Although she continued to work frequently throughout the 1940s, the quality of her roles diminished and her career began to lose momentum. She became a U.S. citizen during World War II in a display of solidarity with her adopted country. In 1946, shortly after completing work on Three Strangers, she left Hollywood to return to New York City where she married her second husband Stuart Scheftel, a grandson of Isidor Straus. She returned to Britain to film So Evil My Love (1948) and received strong reviews for her performance as an alcoholic adultress. In 1951 she appeared in The Late Edwina Black before returning to America.The 1950s provided her with very few opportunities in film, but in the 1960s she asserted herself as a character actress, and her career enjoyed a revival. Among her successful films of this period were Ten North Frederick (1958), The Pawnbroker (1964) and Rachel, Rachel (1968). Her other films include The Mango Tree (1977) (for which she received an Australian Film Institute "Best Actress" nomination), Arthur (1981), Poltergeist II: The Other Side (1986) and Arthur 2 (1988).From the 1940s she began to act more on stage and she won acclaim for her performance in the 1971 revival of Long Day's Journey Into Night. She also achieved success as a theatre director, becoming one of the first women to received a Tony Award nomination for directing (1982) for the production Mass Appeal.She also appeared frequently on television in such series as Alfred Hitchcock Presents, Robert Montgomery Presents, Naked City, St. Elsewhere and Cagney and Lacey. In 1983, she played Rose Kennedy in the mini-series Kennedy. In 1987, she played the title role in the TV pilot Mabel and Max, (Barbra Streisand's first television pilot production). She received an Emmy Award nomination for a guest role playing Anna in The Golden Girls Mother's Day episode in 1988. She won a Daytime Emmy award for her appearance in the episode 'Rodeo Red and the Runaways' on NBC Special Treat.The lithograph photo has been autographed on the front by Geraldine Fitzgerald with a fountain pen in blue.............BOTH PHOTO AND AUTOGRAPH ARE IN VERY GOOD CONDITION............................ 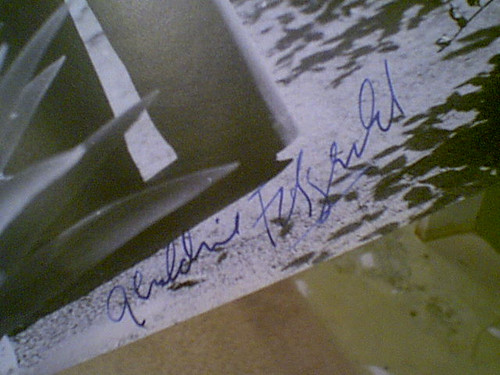