This item is a 10" X 13", black and white lithograph photo of French actor Fernandel. The lithograph photo has been mounted on a 10" X 13" piece of photography paper.Born Fernand Joseph Desire Contandin, Fernandel was a great French comedy star with a long, toothy face and a shy manner. The son of a music-hall entertainer, he began performing while still a child; in his teens he supported himself in a variety of jobs while gaining experience as an amateur comedian and singer. In 1922 he turned professional, soon becoming popular in vaudeville, operettas, and music-hall revues. He debuted onscreen in 1930, going on to perform in many minor films before becoming very popular with his serious role in the screen adaptation of Maupassant's Le Rosier de Madame Husson (1932). For the next four decades he was France's top comedic actor, giving more than 100 comic performances onscreen; occasionally he also had dramatic roles. He was perhaps best-loved for his portrayal of the humorously indomitable, eccentric priest at war with the town's communist mayor in the "Don Camillo" series. Also popular outside of France, he occasionally appeared in Italian and American productions; his first Hollywood film was Around the World in Eighty Days (1956) in which he played David Niven's coachman. Fernandel also directed or co-produced a few of his own films.The lithograph photo has been autographed on the front cover by Fernandel with a fountain pen in black.........BOTH PHOTO AND AUTOGRAPH ARE IN EXCELLENT CONDITION............. 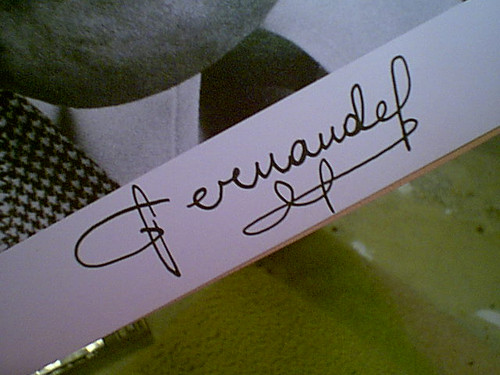