Original Soundtrack-"Old Yeller"(Disneyland 1024)-LP. This vintage soundtrack LP was released in 1974 and features the 1957 Movie-"Old Yeller" starring Fess Parker and Dorothy McGuire.Based on the novel by Fred Gipson, Old Yeller is set in Texas in 1869. While his father is away on a cattle drive, 15-year-old Travis Coates (Tommy Kirk) takes over management of the family farm. Adopting a "strictly business" policy, Travis is irritated when younger brother, Arliss (Kevin Corcoran), adopts a frisky stray dog. But soon Travis is as fond of the dog as everyone else in the family; moreover, "Old Yeller" is an excellent watchdog. But while fighting off a mad wolf, Yeller is infected with rabies. Though Yeller seems unaffected at first, he eventually behaves so viciously that the disheartened Travis has no choice but to shoot the dog. A heart-to-heart talk between Travis and his returning father (Fess Parker), coupled with the adoption of a new pup, paves the way to an emotional but reasonably happy ending. Earning eight million dolalrs domestically on its first release, Old Yeller convinced Walt Disney to devote more and more time to live-action films and less time to animation -- which at the time was a sagacious business move. In 1963, Disney released a lesser sequel to Old Yeller titled Savage Sam. The LP has been autographed on the front cover by Fess Parker with a fountain pen in black and Dorothy McGuire with a fountain pen in blue.................CONDITION OF VINYL IS VG. CONDITION OF COVER AND AUTOGRAPHS IS WEAK VG>.............. 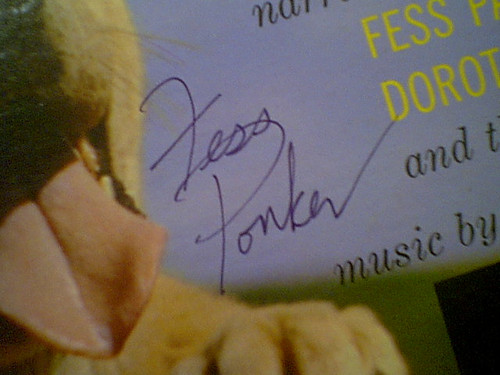