Frances Faye(Bethlehem 6017)-"Sings Folk Songs"-LP. Some tracks include-St. James Infirmary,Frankie And Johnny,Greensleeves,Clementine plus more!Frances Faye (November 4, 1912 - November 8, 1991) was an American cabaret and show tune singer and pianist. She was born to a working-class Jewish family in Brooklyn, New York City. She was a second cousin of actor Danny Kaye.Born as Frances Cohen, Faye's showbiz career began at the age of 15 in nightclubs where she first became a star. She appeared in one Bing Crosby film; Double or Nothing singing "After You". She wrote the song "Well All Right" recorded by the Andrews Sisters. Faye made her solo recording debut in 1936. Her act became famous for including double entendres and references to homosexuality and lesbianism. Faye herself was bisexual and hinted at this frequently in her act; she would often playfully alter pronouns in love songs or weave her girlfriend's name into lyrics of song. For instance, she inserted "it's a Teri, Teri day" into "The Man I Love" and on national television sang "why do all the boys treat Teri so right" in "I Wish I Could Shimmy Like My Sister Kate."She recorded about a dozen albums for many different record labels, including Capitol Records and Imperial Records and jazz labels Verve Records and Bethlehem Records.The LP has been autographed on the front cover by Frances Faye with a fountain pen in black..........CONDITION OF VINYL,COVER AND AUTOGRAPH IS WEAK VG. 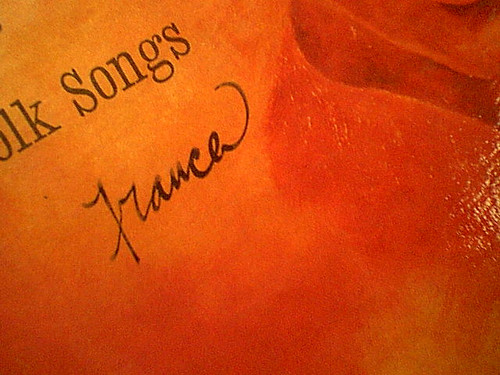