The Philadelphia Inquirer TV Week-October 31, 1976-magazine. This magazine of tv listings features a color cover photo of Farrah Fawcett plus an article on her with photos.Farrah Fawcett played Jill Munroe in the original cast of the 1970s TV show Charlie's Angels, joining Kate Jackson and Jaclyn Smith in the titular trio of distaff detectives. The show made Fawcett a star and she briefly became America's hottest pin-up; a famous poster of her wearing a red swimsuit plus her rampant mane of blonde hair sold a reported 12 million copies. She left Charlie's Angels after one season (1976-77) to embrace a movie career, but her popularity never again reached the same heights. She did win acclaim as a battered wife in the TV movie The Burning Bed (1984), and her feature films include Logan's Run (1976, with Jenny Agutter), Extremities (1986), and The Apostle (1997, with Robert Duvall). She was married to actor Lee Majors (star of TV's The Bionic Man) from 1973-1983, and was at times billed as Farrah Fawcett-Majors. She later had a long love affair with actor Ryan O'Neal; they had one son, Redmond, born in 1985. Fawcett was diagnosed with anal cancer in 2006; she had just completed a documentary about her battle with the disease, titled Farrah's Story, when she died in 2009. The TV WEek has been autographed on the front cover by Farrah Fawcett........BOTH TV WEEK AND AUTOGRAPH ARE IN VERY GOOD CONDITION...................... 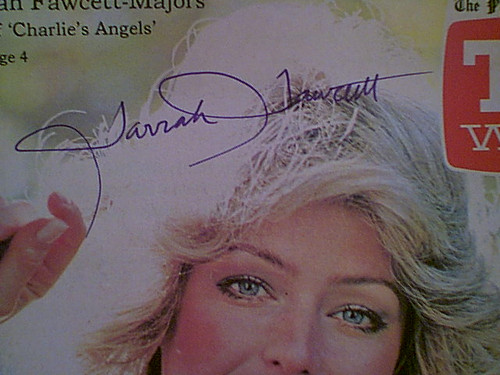