This item is an 8" X 10",color publicity photo featuring actor Colin Farrell in a scene from the 2003 Movie-"Daredevil".Daredevil is a 2003 American superhero film written and directed by Mark Steven Johnson. Based on the Marvel Comics character of the same name, the film stars Ben Affleck as Matt Murdock, a blind lawyer who fights for justice in the courtroom and out of the courtroom as the masked vigilante Daredevil. Jennifer Garner plays his love interest Elektra Natchios; Colin Farrell plays the merciless assassin Bullseye; David Keith plays Jack "The Devil" Murdock, a washed up fighter who is Matt's father; and Michael Clarke Duncan plays Wilson Fisk, also known as the crime lord Kingpin.The film began development in 1997 at 20th Century Fox and Columbia Pictures, before New Regency acquired the rights in 2000. Johnson chose to shoot the film primarily in Downtown Los Angeles despite the Hell's Kitchen, Manhattan setting of the film and the comics. Rhythm and Hues Studios were hired to handle the film's CGI needs. Graeme Revell composed the Daredevil score which was released on CD in March 2003, whereas the various artists soundtrack album, Daredevil: The Album, was released in February.The photo has been autographed on the front by Colin Farrell.............BOTH PHOTO AND AUTOGRAPH ARE IN VERY GOOD CONDITION. 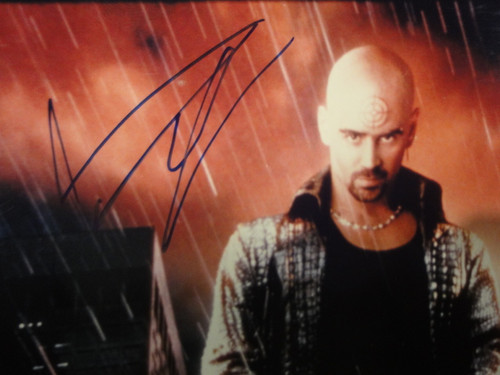