This item is an 8" X 10",black and white photo of actress Alice Faye at the height of her movie career.The daughter of a New York City cop, 14-year-old Alice Faye lied about her age to secure her first chorus girl job in 1929. While appearing in the 1933-1934 edition of George White's Scandals, Faye became the protégée of the show's star, Rudy Vallee, touring with Vallee's orchestra as vocalist. At Vallee's insistence, she was cast in the 1934 Fox Studios film version of George White's Scandals, elevated to the leading role when Lillian Harvey walked off the set. Despite unpleasant tabloid coverage when Vallee's wife sued her for alienation of her husband's affections, Faye was kept on by Fox, which lightened her already blonde hair and attempted to groom her as the "new Jean Harlow." After a few negligible leading roles in such Fox productions as She Learned About Sailors (1934) and 365 Nights in Hollywood (1935), she established her screen image as a tough, contralto-voiced cookie with a heart of gold, her popularity ascending with each successive film. During this period, she wed her frequent co-star Tony Martin, a union which lasted until 1940. Though a favorite with fans and coworkers alike, Faye regularly put her film career in jeopardy by clashing with 20th Century Fox head man Darryl F. Zanuck, who, realizing that he couldn't very well throw her off the payroll (not with such box-office hits as In Old Chicago and Rose of Washington Square to her credit), decided to "punish" her by hiring Betty Grable as Faye's potential successor. The press had a field day fabricating a deadly rivalry between Faye and Grable, though in fact the actresses got along reasonably well and were felicitously teamed in Tin Pan Alley (1940). Faye's feud with Zanuck came to a head in 1945 when her leading role in Fallen Angel was cut down to practically nothing. She quit movies cold, electing to devote her time to her second husband, bandleader Phil Harris, and her two daughters. Though banned from films by Zanuck, Faye flourished on radio, co-starring with Harris on a popular comedy series which ran for several successful seasons. In 1962, she returned to the screen in the ill-advised remake of State Fair, in which the 47-year-old actress played the mother of Pat Boone. She made several TV guest appearances in the 1960s and 1970s, toured the nightclub and straw hat circuit, and co-starred with John Payne in a Broadway revival of Good News. Since the death of Phil Harris in 1994, Alice Faye participated in several TV specials about Hollywood's "Golden Age," and remained in contact with her numerous, still-faithful fans until her death from cancer in early May 1998. The photo has been autographed on the front by Alice Faye with a fountain pen in black..........BOTH PHOTO AND AUTOGRAPH ARE IN VERY GOOD CONDITION..................... 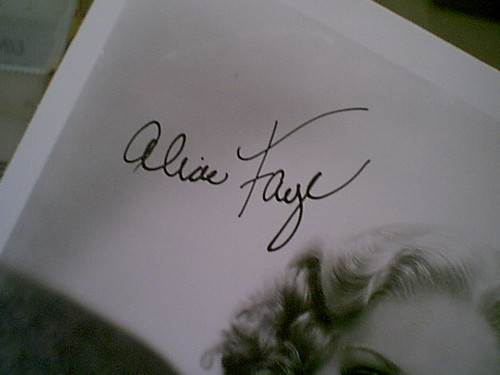