Ellery Queen-"The Dragon's Teeth"-1939-Frederick A. Stokes-5 1/2" X 8"-325 pages-Hardcover book-Signed By Author.Ellery Queen is both a fictional character and a pseudonym used by two American cousins from Brooklyn, New York: Daniel Nathan, alias Frederic Dannay (October 20, 1905September 3, 1982) and Manford (Emanuel) Lepofsky, alias Manfred Bennington Lee (January 11, 1905April 3, 1971), to write detective fiction.In a successful series of novels that covered 42 years, Ellery Queen served as both author's name and that of the detective-hero. During the 1930s and much of the 1940s, that detective-hero was possibly the best known American fictional detective. Movies, radio shows, and television shows have been based on their works.The two, particularly Dannay, were also responsible for co-founding and directing Ellery Queen's Mystery Magazine, generally considered as one of the most influential English crime fiction magazines of the last sixty-five years. They were also prominent historians in the field, editing numerous collections and anthologies of short stories such as The Misadventures of Sherlock Holmes.Their 994-page anthology for The Modern Library, 101 Years' Entertainment: The Great Detective Stories, 1841-1941, was a landmark work that remained in print for many years. Under their collective pseudonym, the cousins were given the Grand Master Award for achievements in the field of the mystery story by the Mystery Writers of America in 1961.The book has been autographed on the title page by Manfred B. Lee with a fountain pen in blue and Frederic Dannay ("Ellery Queen") with a fountain pen in black............BOTH BOOK AND AUTOGRAPHS ARE IN VERY GOOD CONDITION.............. 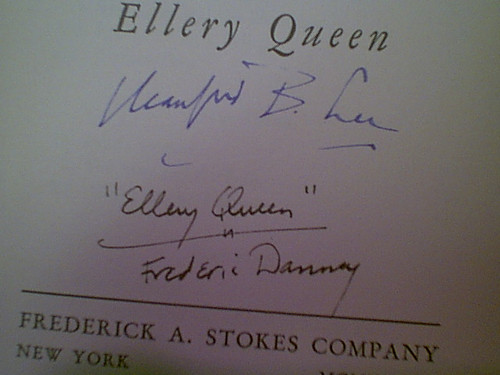