TV Guide Magazine-March 2,1963-28pages. This vintage TV Guide-which originally sold for fifteen cents-features a color cover photo of Wendell Cory and Jack Ging plus an article with photos on "The Eleventh Hour".The Eleventh Hour is an American medical drama about psychiatry starring Wendell Corey, Jack Ging, and Ralph Bellamy, which aired sixty-two new episodes plus selected rebroadcasts on NBC from October 3, 1962, to September 9, 1964.The series, loosely comparable to the 1961 NBC hit Dr. Kildare, starring Richard Chamberlain and Raymond Massey, reveals the human stories of people who come to the psychiatrist either through private practice, a hospital, or a court of law. In 1963, the series shared a two-part crossover episode with Dr. Kildare; both programs used the theme of wise teacher and young intern.The term "eleventh hour" refers to a time of last resort in an aggrieved person's life, as he faces a potential nervous breakdown. The TV Guide has been autographed on the front cover by Wendell Corey and Jack Ging..............BOTH TV GUIDE AND AUTOGRAPHS ARE IN VERY GOOD CONDITION......... 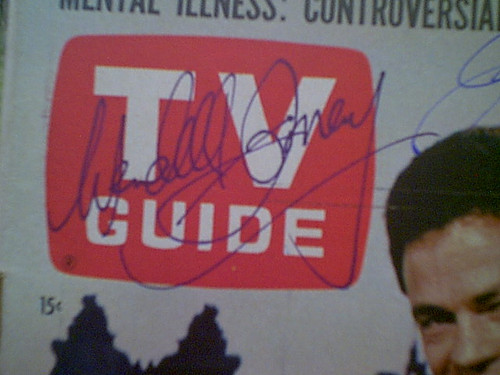