This item is a 9" X 12",color lithograph photo of musician Mike Einziger.Michael Aaron Einziger (born June 21, 1976 in Los Angeles, California) is a Grammy-nominated musician known as the co-writer and guitarist of the alternative rock band Incubus. Einziger is widely known as an innovator of the use of pedalboard guitar effects during live concerts, and was voted #41 in Total Guitar's top 100 guitarists of all time in 2002. In an interview with Gibson Guitars, writer Steven Rosen states "[Einziger] hasn’t played the guitar so much as he has manipulated it, submitted it to his own needs. Einziger fashions a sonic tapestry that draws heavily from the Zappa/Vai/Hendrix school of rock."[1] Mike is also an active composer, writing his first full-scale orchestral concert entitled "End.>vacuum", as well as "Forced Curvature of Reflective Surfaces"; an experimental composition that will be featured at the "West Coast, Left Coast" Festival at Walt Disney Concert Hall. Einziger is currently enrolled as a student at Harvard University.The lithograph photo has been autographed on the front by Mike Einziger...........BOTH PHOTO AND AUTOGRAPH ARE IN VERY GOOD CONDITION......... 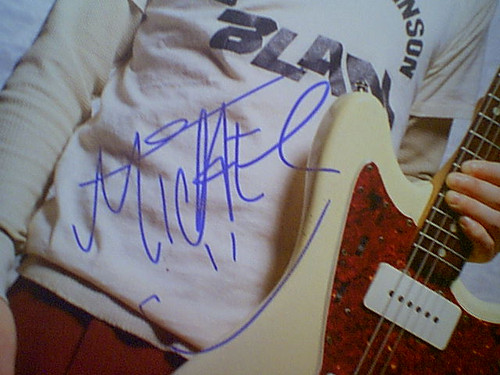