This item is a 3 1/2" X 5 1/2", color fan club postcard from the 1960's featuring a color photo of actor Anthony Eisley. The back of the postcard has a "standard" message from Anthony Eisely.Long before there was an "Anthony Eisley", a darkly handsome young man named Fred Eisley could be seen as John Clinton on the 1953 Ezio Pinza TV vehicle Bonino. Eisley retained his given name while appearing as Johnny Cassiano in the Jack Webb-produced TVer Pete Kelly's Blue (1959), and was still Fred Eisley for his inaugural film appearances in The Young Philadelphians (1959) and The Wasp Woman (1960). He wasn't rechristened Anthony Eisley until September of 1959, when he was cast as private detective Tracy Steele on the Warner Bros. cop series Hawaiian Eye; he remained in this role until 1962, when he was replaced by Troy Donahue. Whatever fame he had achieved via Hawaiian Eye faded the moment he left the series, though he continued making supporting appearances in films ranging from Samuel Fuller's The Naked Kiss (1964) to the redoubtable Al Adamson's Dracula vs. Frankenstein (1971). He also worked frequently for his old Pete Kelly's Blues boss Jack Webb, accepting guest spots in such series as Dragnet, Adam 12 and Emergency. From 1969 onward, Anthony Eisley was busiest on the daytime-drama circuit, playing Charles Diedrich on Bright Promise (1969-72) and Philip Dade on Capitol (1982-87). The postcard photo has been autographed on the front by Anthony Eisley in black.........................BOTH POSTCARD PHOTO AND AUTOGRAPH ARE IN EXCELLENT CONDITION........... 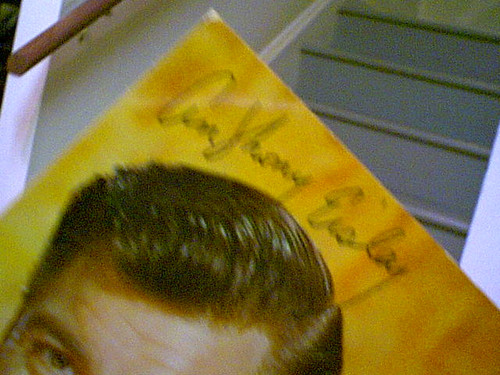