"Slaughter On Tenth Avenue"-1948-Chappell-sheet music. This famous song is the theme from the 1957 UNiversal Movie-"Slaughter On Tenth Avenue". The movie stars Richard Egan,Jan Sterling and Julie Adams and they are featured on the front cover in original scenes.Though Slaughter on Tenth Avenue's background music relies heavily on the Richard Rodgers composition of the same name, the film itself bears no relation to the ten-minute ballet for which Rodgers wrote the piece. Instead, this Albert Zugsmith-produced crime meller attempts to expose waterfront union racketeering. In trying to solves a murder on the docks, deputy DA Richard Egan runs up against the stevedores' code of silence. It also dawns on Egan that his own boss (Sam Levene) shows little interest in pursuing justice in this instance. The DA is finally able to mount a case, but at the crucial courtroom moment he may have to pull out due to lack of evidencea lack engineered by crooked boss Walter Matthau, who has several local politicians in his pocket. A last-minute dockside battle enables Egan to bring the racketeers to justice. Slaughter on Tenth Avenue was based on New York district attorney William J. Keating's memoirs The Man Who Rocked the Boat. This sheet music originally sold for sixty cents. The sheet music has been autographed on the front cover by Richard Egan and Julie Adams in blue fountain pen and Jan Sterling in red fountain pen.............BOTH SHEET MUSIC AND AUTOGRAPHS ARE IN VERY GOOD CONDITION................ 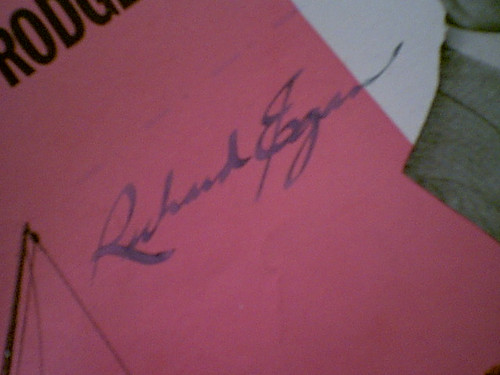