This item is a 7 1/2" X 9 1/2", black and white photo of Nelson Eddy. The photo was a supplement to The Philadelphia Record Newspaper and is dated Sunday June 28, 1926.Nelson Eddy was an actor and singer noted for his rich baritone voice and wooden acting. He sang soprano in church choirs as a boy. He moved to Philadelphia as a teenager, and after a number of odd jobs won a competition in 1922 to join the Philadelphia Civic Opera; he went on to perform frequently with the group, and played Tonio in Pagliacci at the New York Metropolitan Opera in 1924. In the early '30s Eddy began appearing on radio and had a successful concert tour; this led to a movie contract with MGM, and he debuted onscreen in 1933. In 1935 he and Jeanette MacDonald were teamed together, going on to appear in a series of sentimental operettas beginning with Naughty Marietta (1935); billed as "America's Sweethearts" or the "Singing Sweethearts," the team became extraordinarily popular, and for a time they were the screen's most popular duo, appearing in one box office smash after another. After their last film, I Married an Angel (1942), Eddy's career quickly went into decline, and he made no films after 1947. He continued to appear in concerts and nightclubs and made some recordings; in March 1967, he died of a stroke. The photo has been autographed on the front by Nelson Eddy in blue fountain pen.............BOTH PHOTO AND AUTOGRAPH ARE IN NICE CONDITION FOR THEIR AGE.FRONT OF PHOTO HAS SOME STAINS WHICH DO NOT AFFECT AUTOGRAPH........... 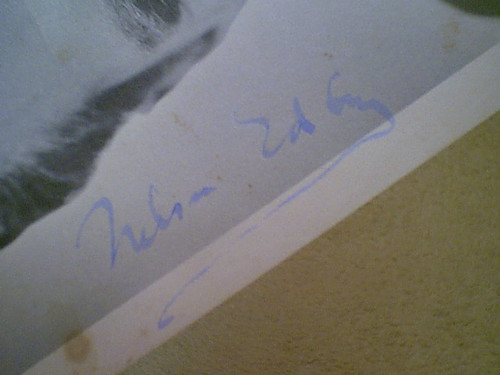