This item is a 4' X 5", black and white fan club photo of actress Barbara Eden as she starred in the television series-I Dream Of Jeanie".Barbara Eden (born Barbara Jean Morehead; August 23, 1931) is an American actress, singer, and producer best known for her starring role as "Jeannie" in the sitcom I Dream of Jeannie. I Dream of Jeannie is an American fantasy sitcom television series, created by Sidney Sheldon, starring Barbara Eden as a sultry, 2,000-year-old genie and Larry Hagman, as an astronaut with whom she falls in love and eventually marries. Produced by Screen Gems, the show originally aired for 139 episodes over five seasons, from September 18, 1965, to May 26, 1970, on NBC. The photo has been autographed on the front by Barbara Eden.....BOTH PHOTO AND AUTOGRAPH ARE IN EXCELLENT CONDITION. 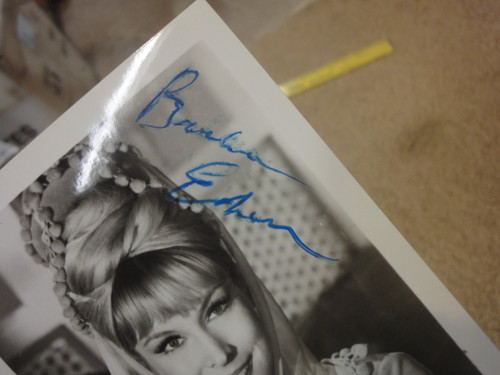