THIS IS AN AUTHENTICALLY AUTOGRAPHED LP BY BILLY ECKSTINE.. BILLY ECKSTINE(REGENT MG 6054)MY DEEP BLUE DREAM. RELEASED IN 1957. COVER IS SIGNED BY BILLY ECKSTINE. TRACKS:THERE ARE SUCH THINGS, SAY IT ISN'T SO, I DO DO YOU, IN THE STILL OF THE NIGHT, MY DEEP BLUE DREAM, WHERE ARE YOU, WITHOUT A SONG, BLUE, LOVE IS THE THING, GLOOMY SUNDAY. CONDITION OF THE VINYL,COVER, AND AUTOGRAPH IS VG. Billy Eckstine (8 July 1914–8 March 1993), born William Clarence Eckstein in the East Liberty neighborhood of Pittsburgh, Pennsylvania, was a ballad singer and bandleader of the Swing Era. Eckstine's smooth baritone and distinctive vibrato broke down barriers throughout the 1940s, first as leader of the original bop big-band, then as the first romantic black male in popular music. An influence looming large in the cultural development of soul and R&B singers from Sam Cooke to Prince, Eckstine was able to play it straight on his pop hits "Prisoner of Love," "My Foolish Heart" and "I Apologize." Born in Pittsburgh but raised in Washington, D.C., Eckstine began singing at the age of seven and entered many amateur talent shows. He had also planned on a football career, though after breaking his collar bone he made music his focus. After working his way west to Chicago during the late '30s, Eckstine was hired by Earl Hines to join his Grand Terrace Orchestra in 1939. Though white bands of the era featured males singing straightahead romantic ballads, black bands were forced to stick to novelty or blues vocal numbers until the advent of Eckstine and Herb Jeffries (from Duke Ellington's Orchestra). 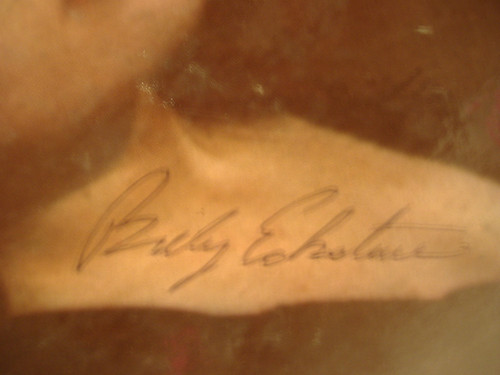