Abba Eban(Spoken Arts 757)-"Reads From The Psalms Ecclesiastes In English And Hebrew"-LP. This vintage LP was released in the 1960's and features a photo of Abba Eban on the back cover.Abba Eban, orator, Israeli statesman and diplomat, Foreign Minister from 1966 to 1974, was born in Cape Town, South Africa, and brought up in England. He studied oriental languages and classics at Cambridge University, England, where he was a lecturer in Arabic from 1938 to 1940. He was already a public speaker of caliber and renowned for his presence at debates on the Middle East. During World War II he served in the British Army in Egypt and Mandate Palestine, becoming an intelligence officer in Jerusalem, where he coordinated and trained volunteers for resistance in the event of a German invasion. In 1946, the Jewish Agency appointed him political information officer in London, where he participated in the negotiations with the British government and the UN concerning the establishment of the State of Israel. When Israel became independent in 1948, he was appointed its first Ambassador at the UN. From 1950 until 1959 Eban was both Israel's ambassador in Washington, D.C., and chief delegate to the UN. On his return to Israel in 1959, Eban was elected to the Knesset as a member of the Mapai party, and served under David Ben-Gurion as Minister of Education and Culture from 1960 to 1963. From 1963 to 1966, he was deputy to Prime Minister Levi Eshkol. He was also president of the Weizmann Institute at Rehovot from 1959 to 1966. As Israel's Foreign Minister from February 1966 to 1974, Eban tried to strengthen relations with the United States and to associate Israel with the European Economic Community. During and after the Six-Day War of June 1967, he led Israel's diplomatic struggle in the UN. Following the Yom Kippur War of October 1973, Abba Eban helped bring about a disengagement of Egyptian and Israel forces in Sinai. Eban continued to serve in succeeding Knessets, but outside the ministerial sphere, as a member and later as Chairman of the Foreign Affairs and Defense Committee, until he retired from politics in 1988. He was widely admired for his brilliant oratory outside Israel and his statesmanship at the UN on Israel's behalf, including some dramatic oratory. He wrote a scathing article on the infamous UN "Zionism=Racism" Resolution in 1975. A figure of multiple accomplishments, Eban was fluent in ten languages, with the dual vocation of statesman and erudite academic. Throughout his career, he found time to publish meticulous and detailed historical works based on his vast knowledge and personal experience. His books include Voice of Israel (1957); My People (1969); My Country (1972), and Personal Witness (1992), as well as An Autobiography. After his retirement, he was able to dedicate more time to writing and lecturing, including essays and books The New Diplomacy and Diplomacy for the Next Century (1998), but his major landmarks were his involvement in the creation of three major historical television documentary series about the Jewish People and Israel, in which his remarkable voice rings througout the narration with elegance and confidence. The first two were for Israel Television: Heritage: Civilization and the Jews; Personal Witness: A Nation is Born; and The Brink of Peace was produced with PBS.The LP has been autographed on the back cover by his photo by Abba Eban with a fountain pen in blue...........................CONDITION OF VINYL,COVER AND AUTOGRAPH IS MINT MINUS................ 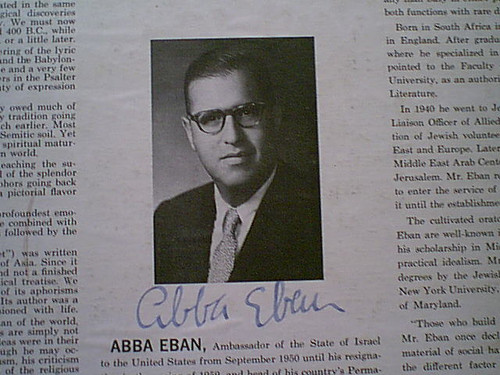