This item is an original press kit which features the 1990 Warner Brothers Movie-"White Hunter Black Heart" starring Clint Eastwood. This press kit was a promotional item only and was available for retail sale. The press kit was distributed to movie theatre owners and members of the Press.The press kit consists of a 9" X 12" folder from Warner Brothers. The folder contains 6-8" X 10",black and white photos of scenes from the movie.Something of a sleeper in its 1990 release, White Hunter, Black Heart is one of Clint Eastwood's most engaging films. It is based on Peter Vietel's novel about the location shoot of John Huston's immortal The African Queen. But the focus is never on Bogie and Hepburn. Egomaniacal director John Wilson (Eastwood) is far more interested in killing an elephant than in making a movie. His old friend and scriptwriter Pete Verrill (Jeff Fahey) and his producer, Paul Landers (George Dzundza), are on hand to try and talk him down from this pursuit. Eastwood's verbose, outlandish performance will be particularly remarkable to fans who tend to think of him as the soft-spoken tough guy. The press kit has been autographed on the front by Clint Eastwood..............CONDITION OF PRESS KIT,AUTOGRAPH AND PHOTOS IS VERY GOOD................... 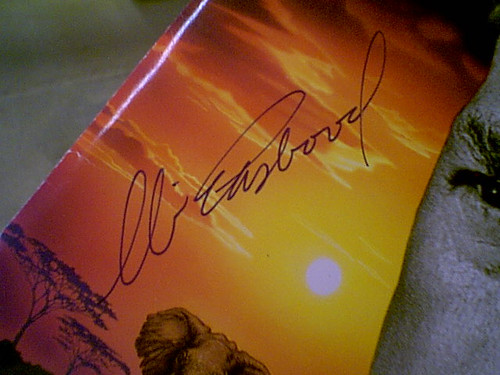