This item is an original press kit featuring the 1984 movie-"Tightrope" starring Clint Eastwood. This press kit was a promotional item and was not available for retail sale. The press kit was only distributed to movie theatre owners and members of the press. The press kit consists of an original 9" X 12" folder. The folder contains 25-8" X 10",black and white photos of original scenes from the movie.Clint Eastwood plays a New Orleans detective determined to track down a serial killer of prostitutes. Complicating matters is the fact that the unknown culprit is very likely an S&M fetishist....and so is Eastwood. The detective is profoundly disturbed at the likelihood that he and the killer have the same taste in women; this element of the case is equally troublesome for psychologist Genevieve Bujold, who finds herself attracted to Eastwood. The climax involves the killer's attempting to throw Eastwood off the track by kidnapping one of the detective's two daughters (played quite well by Clint's real-life daughter Alison). Despite its reliance on bloodletting, particularly in the final scenes, Tightrope is most effective when probing the hangups and vulnerabilities of Clint Eastwood's character.The press kit has been autographed on the front by Clint Eastwood.............CONDITION OF PRESS KIT,AUTOGRAPH AND PHOTOS IS VG....................... 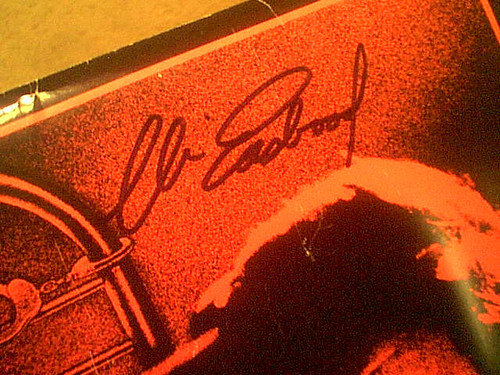