This item is a 12" X 12" color lithograph photo of actor Clint Eastwood.Clint Eastwood is the Oscar-winning director of Unforgiven and Million Dollar Baby, and an iconic actor best known for his films as tough cop "Dirty Harry" Callahan and as the western anti-hero known as The Man With No Name. Clint Eastwood first came to fame between 1959 and 1966, when he was a regular on the TV western Rawhide. In 1964 he went to Spain to work on A Fistful of Dollars, a western feature film with director Sergio Leone. The movie and his subsequent outings with Leone -- films dubbed "spaghetti westerns," with Eastwood as a nameless, taciturn loner -- made him a star. In the 1970s Eastwood became a superstar with his series of Dirty Harry movies, with the actor as a tough, taciturn cop with a vigilante streak. He then began directing and producing his own films, beginning with Play Misty For Me (1971). Since then he has earned a reputation as a successful and efficient producer/director/actor, and qualifies as one of the biggest stars in Hollywood history. As an actor, his films include The Outlaw Josey Wales (1976, based on the novel by Forrest Carter), Every Which Way But Loose (1978), and Gran Torino (2008). As a director, his films include: Unforgiven (1992, co-starring Gene Hackman), Mystic River (2003, starring Sean Penn), Million Dollar Baby (2004, with Hilary Swank and Morgan Freeman), Letters From Iwo Jima (2006) and Changeling (2008, starring Angelina Jolie). He was given the Oscar as best director for both Unforgiven and Million Dollar Baby, and both films also won Academy Awards as the best picture of the year. He was nominated for a directing Oscar for Letters from Iwo Jima. In 2012 he was back onscreen as a crusty old baseball scout in Trouble With the Curve.The lithograph photo has been autographed on the front by Clint Eastwood............BOTH PHOTO AND AUTOGRAPH ARE IN VERY GOOD CONDITION. 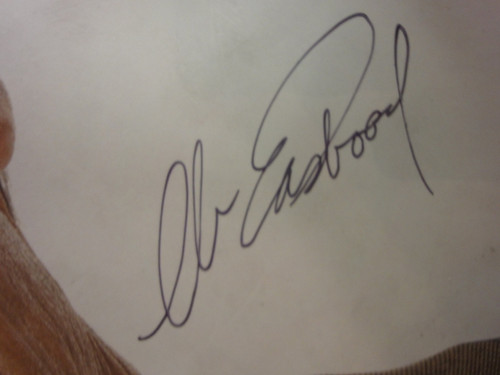