Original Soundtrack-"Bronco Billy"(Elektra 512)-Sealed LP. This LP featured the 1980 Movie-"Bronco Billy". The movie stars Clint Eastwood and he is featured on the front and back covers in original color scenes.Bronco Billy stars Clint Eastwood (who also directed) as the impresario of a seedy wild west show. Going along for the ride is spoiled socialite Sondra Locke, who is "initiated" by being pressed into service as the wrong end of a knife-throwing act. The rest of the troupe, like Eastwood himself, are losers in life who yearn for the freedom and opportunity of the long-gone Old West. Despite its raucous ad campaign, Bronco Billy is at base a wistful character study, avoiding the usual trappings of car chases and redneck villains and offering quiet chuckles instead of belly laughs. Unfortunately it failed to click with the public, compelling Eastwood to temporarily return to his old crash-bang-pow formula in his next few films.A piece of shrink wrap has been removed from the front cover and the LP has been autographed there by Clint Eastwood...........CONDITION OF RECORD IS STILL SEALED.CONDITION OF AUTOGRAPH IS EXCELLENT.COVER HAS A SMALL CUT OUT NOTCH IN UPPER LEFT CORNER............. 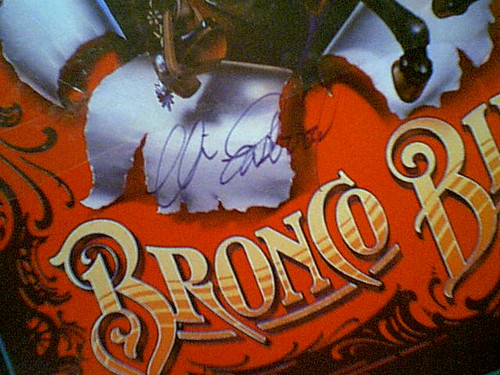