This item is a 7 1/2" X 10" color mini cardboard poster from the FX Television Network. The cardboard color poster features Dylan Walsh and Julian McMahon in a scene from the 2003 television series "Nip/Tuck". Nip/Tuck is an American television drama series created by Ryan Murphy and broadcast on FX Networks. The show is set at the McNamara/Troy plastic surgery practice, and follows the professional and personal lives of its owners, Dr. Sean McNamara and Dr. Christian Troy (played by Dylan Walsh and Julian McMahon respectively). The first four seasons of the show were set in Miami, but the characters relocated to Los Angeles for the fifth and sixth season.The show is now in its sixth and final season and, after a break for the Christmas holiday period, will resume its final run of episodes on January 6, 2010. The series finale (which is also the 100th episode) is scheduled for March 2010.The show is known for its graphic depictions of sex, violence and surgical operations.The poster has been autographed on the front by Dylan Walsh and Julian McMahon.........BOTH POSTER AND AUTOGRAPH ARE IN AVERAGE CONDITION............ 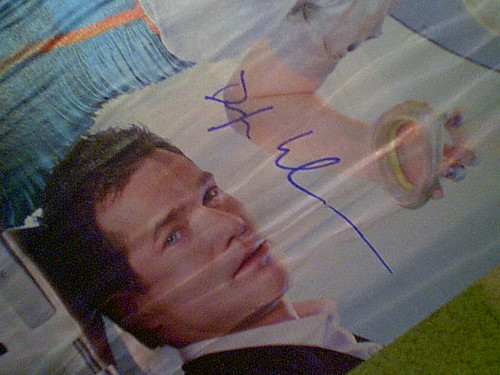