Durant, Will "The Story Of Philosophy" Book Signed Autograph

William James Durant (November 5, 1885 – November 7, 1981) was an American writer, historian, and philosopher. He became best known for his work The Story of Civilization, 11 volumes written in collaboration with his wife, Ariel Durant, and published between 1935 and 1975. He was earlier noted for The Story of Philosophy (1926), described as "a groundbreaking work that helped to popularize philosophy". He conceived of philosophy as total perspective or seeing things sub specie totius (i.e. “from the perspective of the whole”)—a phrase inspired by Spinoza's sub specie aeternitatis, roughly meaning "from the perspective of the eternal".He sought to unify and humanize the great body of historical knowledge, which had grown voluminous and become fragmented into esoteric specialties, and to vitalize it for contemporary application. The Durants were awarded the Pulitzer Prize for General Nonfiction in 1968 and the Presidential Medal of Freedom in 1977. The book has been autographed on the title page by Will Durant................BOTH BOOK AND AUTOGRAPH ARE IN EXCELLENT CONDITION. 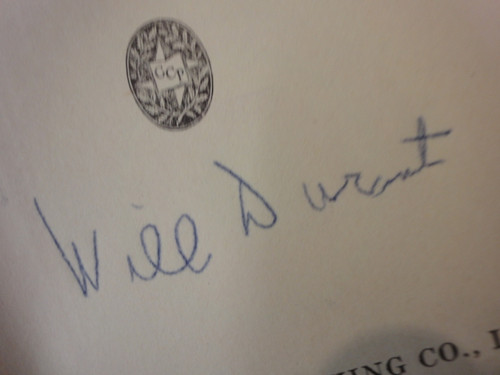 Durant, Will "The Story Of Philosophy" Book Signed Autograph