"Can I Forget You"-1937-Chappell-sheet music.High, Wide, and Handsome is a 1937 American musical film starring Irene Dunne, Randolph Scott, Alan Hale, Sr., Charles Bickford, and Dorothy Lamour.The 110-minute movie was directed by Rouben Mamoulian, and written by Oscar Hammerstein II and George O'Neil, with lyrics by Hammerstein and music by Jerome Kern. It was released by Paramount Pictures.The film is set in rural western Titusville, Pennsylvania. In 1859, railroad tycoon Walt Brennan wants to take over the land of several oil-drilling farmers, led by Peter Cortlandt (with whom Irene Dunne's character, Sally Watterson, falls in love). Brennan wants to use the land to build a railroad. The townspeople block the plan, assisted by a herd of circus elephants, and instead construct their own oil pipeline.In a deliberate nod to Kern and Hammerstein's classic musical Show Boat, which had been filmed with Irene Dunne the year before, Dunne's lovable father Raymond Walburn is the owner of a traveling musical medicine show (much like Cap'n Andy), and Dunne is its star; in addition, Dorothy Lamour sings a torch song, much as Helen Morgan did in Show Boat.The movie includes the classic Kern-Hammerstein song "Can I Forget You?", as well as "The Folks Who Live On the Hill". Director Mamoulian saw to it (with Kern and Hammerstein's help) that most of the songs were firmly integrated into the plot of the film and advanced the storyline.The film was not a success when released, partly because it was shown in roadshow format, which caused it to lose more money than it normally would have.The sheet music has been autographed on the front cover by Irene Dunne and Randolph Scott.......BOTH SHEET MUSIC AND AUTOGRAPHS ARE IN VERY GOOD CONDITION. 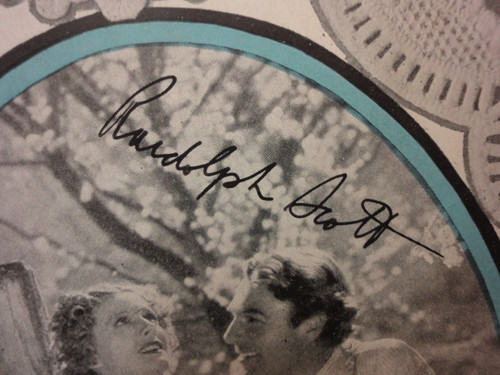