This item is a 5" X 7",black and white photo of actor Howard Duff.Hardcase leading man Howard Duff built his reputation on radio, where among several other assignments he was cast as Dashiell Hammett's two-fisted private eye Sam Spade. He made so vivid an impression in this role that, when cast in his first film Brute Force (1947), he was given special billing in the credits as "radio's Sam Spade." His burgeoning film career was slowed down in the early 1950s by the iniquities of the Hollywood Blacklist. Duff's no-nonsense image was softened into sitcom buffoonery when, in 1957, he was cast in TV's Mr. Adams and Eve. His co-star was his then-wife Ida Lupino, and the series' producer was Lupino's previous husband Collier Young. Ida was a frequent director for Duff's subsequent TV series Dante (1960), in which he more-or-less reprised his Sam Spade characterization. Duff's later TV assignments included a three-year starring stint on Felony Squad (1966-69) and supporting roles in the prime time serials Flamingo Road and Knot's Landing. In the 1970s, Howard Duff returned to filmmaking as a character actor, scoring critical successes with his roles as an eternally inebriated relative in Altman's A Wedding (1978) and as Dustin Hoffman's attorney in Kramer vs. Kramer (1979).The photo has been autographed on the front by Howard Duff with a fountain pen in blue.......BOTH PHOTO AND AUTOGRAPH ARE IN VERY GOOD CONDITION........... 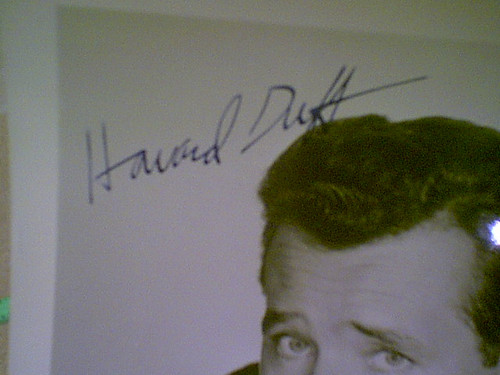