This item is an 8" X 10",black and white photo of actor Howard Duff in a scene from the 1954 Movie-"The Yellow Mountain".Lex Barker trades his Tarzan loincloth for buckskins in the Universal western Yellow Mountain. Barker stars as gold prospector Andy Martin, who has a serious falling out with his partner Pete Menlo (Howard Duff) over the affections of pretty Nevada Wray (Mala Powers). But Andy and Pete patch up their differences to rescue Nevada's father (William Demarest) from the evil machinations of land baron Bannon (John McIntire). William Fawcett, who looks like he was born during the original Gold Rush, once more goes through his "grizzled old prospector" routine. Yellow Mountain was one of a group of Universal oaters designed as double-feature fodder in larger markets, and main-feature status in smaller movie houses. The photo has been autographed on the front by Howard Duff.....BOTH PHOTO AND AUTOGRAPH ARE IN VERY GOOD CONDITION........... 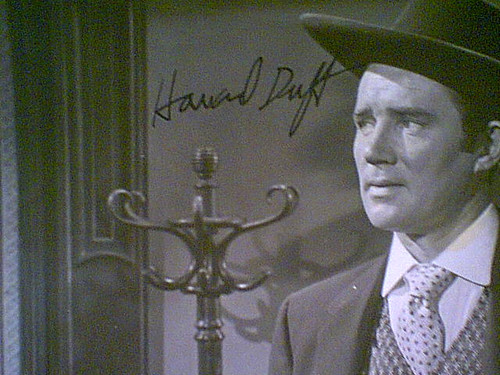