This item is an 8" X 10" color cardboard mini poster of David Duchovny and Gillian Anderson in a scene from "The X Files" television series.The X-Files is an American cult science fiction television series and a part of The X-Files franchise, created by screenwriter Chris Carter. It first aired in September 1993 and ended in May 2002. The show was a hit for the Fox network, and its characters and slogans (e.g., "The Truth Is Out There", "Trust No One", "I Want to Believe") became pop culture touchstones in the 1990s. Seen as a defining series of its era, The X-Files tapped into public mistrust of governments and large institutions, and embraced conspiracy theories and spirituality as it centered on efforts to uncover the existence of extraterrestrial life. The series spawned a spin-off show, The Lone Gunmen, and paved the way for the creation of Chris Carter's later show Millennium.In the series, FBI agents Fox Mulder (David Duchovny) and Dana Scully (Gillian Anderson) are the investigators of X-Files: marginalized, unsolved cases involving paranormal phenomena. Mulder is a believer in the existence of aliens and the paranormal, while Scully, a skeptic, is assigned to make scientific analyses on Mulder's discoveries.[1] Early in the series both agents become pawns in a larger conflict (termed the "mythology" or "mytharc" by the producers), and come to trust only each other. They develop a close relationship, which begins as a platonic friendship, but develops into a romantic relationship by the end of the series' run. In addition to the long-term story arc, "monster of the week" episodes made up roughly two-thirds of the series. In such stand-alone X-Files episodes, Mulder and Scully investigated bizarre crimes with few long-term implications on the storyline.The mini poster has been autographed on the front by David Duchovny and Gillian Anderson............BOTH POSTER AND AUTOGRAPHS ARE IN VERY GOOD CONDITION....................... 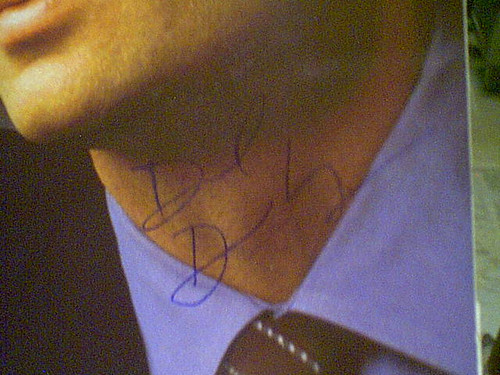