This item is a 7 1/2" X 11", color lithograph photo of David Duchovny.David William Duchovny (born August 7, 1960) is an American actor, writer and director. He has won Golden Globe awards for his work as FBI Special Agent Fox Mulder on The X-Files and as Hank Moody on Californication.Duchovny appeared in an advertisement for Löwenbräu beer in 1987. He appears in two scenes in Working Girl (1988). He had a recurring role as a transvestite DEA agent on the series Twin Peaks and played the narrator/host in the long-running Showtime erotica/softcore TV series Red Shoe Diaries. In 1992, he played the role of Rollie Totheroh, in the biographic film Chaplin, directed by Richard Attenborough, and based on the life of Charlie Chaplin. In 1993, Duchovny began starring in the science fiction series The X-Files as FBI Special Agent Fox Mulder, a conspiracy theorist who believed his sister had been abducted by aliens. The show emerged as a cult hit and quickly became one of The Fox Network's first major hits. Also in 1993, Duchovny was cast alongside Brad Pitt and Juliette Lewis, in the Dominic Sena-directed thriller, Kalifornia. David Duchovny at the 2009 Golden Globe after party. During The X-Files run, in between the fifth and sixth seasons, Duchovny co-starred alongside Gillian Anderson in a 1998 motion picture that continued the X-Files storyline, titled The X-Files: Fight the Future.He remained with the series until quitting in 2001, partly because of a contract dispute that occurred after season seven finished filming. Duchovny appeared in half of the season eight episodes, but did not appear in season nine until the series finale in 2002. He also provided the voice for a parody of his Fox Mulder character in an episode of The Simpsons, titled The Springfield Files.The color lithograph photo has been autographed on the front by David Duchovny...............BOTH PHOTO AND AUTOGRAPH ARE IN VERY GOOD CONDITION. 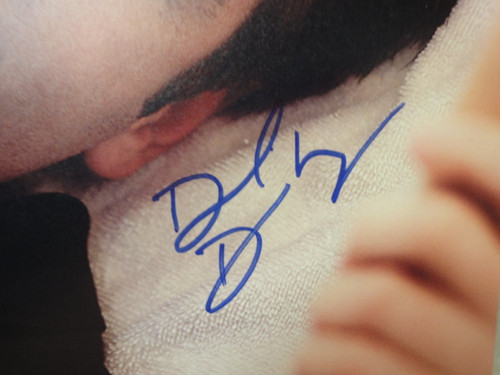