"Gerald Mc Boing Boing At Professor Wumple's Music School"/"Gerald The Circus Elephant Boy"(Cricket 795)-45 RPM Record With Picture Sleeve.Gerald McBoing-Boing is an animated short film produced by United Productions of America (UPA) and given wide release by Columbia Pictures on January 25, 1951. The winner of the 1950 Academy Award for Best Animated Short, Gerald McBoing-Boing is the story of a little boy who speaks through sound effects instead of spoken words.It was adapted by Phil Eastman and Bill Scott from a story by Dr. Seuss, directed by Robert Cannon, and produced by John Hubley. In 1994, it was voted #9 of The 50 Greatest Cartoons of all time by members of the animation field. In 1995, it was selected for preservation in the United States National Film Registry by the Library of Congress as being "culturally, historically, or aesthetically significant".The picture sleeve has been autographed on the front cover by Dr. Seuss........CONDITION OF VINYL,COVER AND AUTOGRAPH IS VG.................. 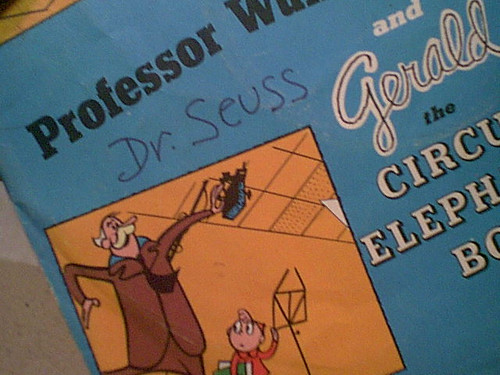